.NET 5.0 is Microsoft’s next major .NET Core release after 3.1. The company chose to name the new release .NET 5.0 instead of .NET Core 4.0 for two reasons. For one, they did not want users to confuse 4.x versions with the .NET Framework 4.x. Also, they eliminated ‘core’ from the name to highlight. NET’s primary implementation hereafter.

Compared to the .NET Core or .NET Framework, the new .NET 5.0 supports many more apps and platforms. .NET 5.0’s Release Candidate 1 launched on September 14, 2020. This new release brought the union between .NET Framework and .NET Core closer than before.

A Release Candidate 2, the final of two RCs, launched on October 13, 2020. However, the final official release of .NET 5.0 took place on November 10, 2020. That is the date when it became available to the general public. 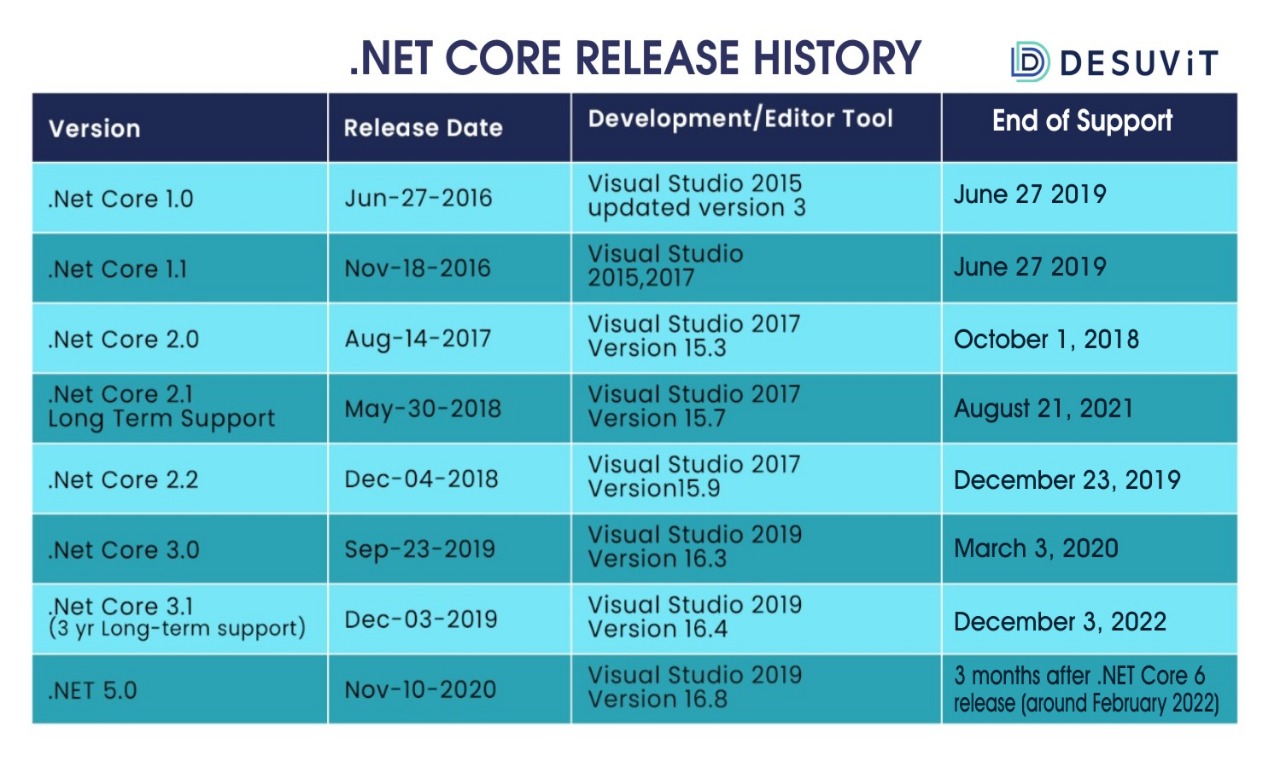 You can download this from .NET 5.0 from dotnet Microsoft.

Before that, though, you may have questions concerning the features of the new release. Well, this article will explain just what is different about .NET 5.0 to you. So read on to know more.

.NET 5.0’s primary purpose is to provide an integrated .NET SDK experience through a single BCL (base class library). The release aims to do this across all .NET 5.0 applications. To accomplish this, it relies on the support of native and web applications across several operating systems.

Just one .NET 5.0 native application project can support Microsoft Duo (Android), Windows, and even Apple iOS. It does this through native controls across these platforms.

Apart from that, .NET 5.0 has other high-level goals, including:

Going forward there will be one .NET and can be used as a target framework for Windows, Linux, macOS, iOS, Android, tvOS, watchOS and WebAssembly and more.

Other notable .NET 5.0 features are:

.NET 5.0 has a lot of high-level goals. However, there are a few things it does not do, and it is equally important to know what those are. So this section will cover those points.

Going forth .NET’s primary implementation is going to be .NET 5.0. However, it will still support .NET Framework 4.x. As such, Microsoft has no plans to transport these technologies to .NET 5.0 from .NET Framework. However, the .NET 5.0 does have a few alternatives within itself:

Developers can designate the net5.0 target framework moniker (TFM) for any project of new application development. That applies to base class libraries as well. The process of sharing code across .NET 5.0 workloads is now exceedingly simple. After all, developers need nothing more than the net5.0 TFM for it.

The net5.0 Target Framework Moniker (TFM) also has a role to play in .NET 5.0 apps and libraries. Here, the TFM merges and switches the netstandard and netcoreapp TFMs. However, sharing code among .NET Core, .NET 5 workloads, and .NET Framework is slightly different. To do this, users need to designate netstandard2.0 as their TFM.

Microsoft’s .NET 5.0 has its fair share of improvements. This section will give you deeper insight into each of them. Before that, though, consider this overview of what is new in.NET 5.0, setting it apart from its predecessors:

.NET 5.0 and .NET 5.0 SDK come with C# 9 and F# 5. .NET 5.0 SDK also features Visual Basic, but this does not have any language changes. Instead, it comes with improvements to hold up the Visual Basic Application Framework on .NET Core.

For more details on the new features of C#9, refer to our previous blog here.

F# is a well-known .NET functional programming language. Now, developers can make use of F# 5 through .NET 5.0. Here is its key feature:

Besides basic string interpolation, it offers typed interpolation. For the latter, a given type should match the format specifier, like:

This function is quite like the sprintf, which formats a string based on type-safe inputs.

.NET libraries now offer complete annotation for nullability. So when you enable nullability, the platform offers you more type information to direct you in using the feature.

One thing to note, though, is that .NET docs are not yet completely annotated. For instance, String.Split(Char[]) will feature an annotation of char[]?.

That said, both System.Device.Gpio and Iot.Device.Bindings packages (versions 1.1.0) feature the new .NET 5.0 annotations. While the two libraries are multi-targeted, .NET 5.0 successfully produces annotations for all targets.

.NET 5.0 also comes with new annotation types. This is because large classes commonly embody object members in helper methods, typically called from a constructor. In such cases, the C# compiler cannot follow the call flow to the object assignment. Instead, it will assume that the member is null as it exits the constructor. As such, it will send a warning with CS8618. The new MemberNotNull attribute easily solves this issue.

All you need to do is apply the attribute to the helper method. The compiler then observes the value fixed by you and realizes that the method is a call from a  constructor. MemberNotNullWhen works similarly.

Remember, though, that when you enable nullability, older .NET Core 3.1 could create new diagnostics. This specifically happens when you retarget the code to .NET 5.0 because of the existence of new annotations.

Both.NET Core 3.1 and .NET 5.0 have seen updates in their Windows Form designers through Visual Studio 16.8. Most notably, it can now support all the controls for Windows Forms. Apart from that, the Telerik UI for WinForms controls is also supported by the new designer.

All the key functionalities expected in a designer are present which involve drag-and-drop, move and resize, cut/copy/paste/delete controls, selection, integration with properties Window, events generation, and much more.

To access Windows desktop APIs, such as WPF, WinRT, or Windows Forms, you will need to target net5.0-windows. Operating system versions, like net5.0-windows10.0.17763.0 or net5.0-windows7, can be specified. Using WinRT APIs requires targeting a Windows 10 version.

net5.0 now permits the use of portable APIs, such as ASP.NET Core. As such, ASP.NET templates are now support .NET 5.0.

Below is an overview of what’s new in the .NET 5.0 target framework:

.NET5.0’s .NET runtime no longer includes the previous WinRT interop system, a breaking change. As such, you cannot run apps and libraries using WinRT through .NET Core 3.x on .NET 5.0. Instead, you will need to rebuild them.

Henceforth, developers will use the new CsWinRT tool. This tool creates C#-based WinRT interop assemblies, deliverable through NuGet. Everyone wanting to expose .NET APIs to native code or native APIs to .NET can rely on the CsWinRT tool.

Logically, the tool is a lot like tlbimp and tlbexp, but better. While tlb tools depended on several COM interop plumbing in the .NET runtime, the CsWinRT tool depends only on public .NET APIs.

Here are the advantages that come with the new WinRT interop model:

Exports for native binaries can now be called into .NET code. The foundation for this requires hosting API support for UnmanagedCallersOnlyAttribute. In turn, this foundation creates an experience of a higher level.

Here is what the  .NET Native exports project allows:

.NET 5.0 essentially offers users a single, unified platform for developing any kind of application. It is advisable to practice with .NET Core 3.1To get the most out of .NET 5.0 and its many unique features.

The migration process will then be a lot smoother. So users can take full advantage of features like the C#, RyuJIT, server garbage collection, and more updates. If you need the help of a seasoned software development company, look no further!

Desuvit’s primary concern is automated workflows and greater productivity for our customers. For a detailed project discussion, Contact us. We can and want to help you grow your business.

Desuvit is a Norway-born software development company delivering Custom Software Development, Mobile Apps, and Web Applications Development for various verticals and business domains. We offer end-to-end solutions for companies with no software or IT division, Startups, and companies that need to scale their software development efforts but lack the expertise required. We help our clients in growing their businesses so we can grow with them. Some of the technologies we work with: .Net, Azure, Microservices, Azure functions(Serverless computing), React Native, Flutter, React JS, TypeScript, Angular, NServiceBus, Azure Service Bus, Azure Queues, SQL Service, MySQL, Cosmos DB, etc.