There are many frameworks available for building mobile applications. However, recently Flutter has been taking the world by storm with their easy software development kit. Especially for developing cross-platform applications.

Launched by Google, Flutter was still in the beta stage when 1.0 was released in 2018. With Flutter’s growing popularity and some significant changes, it has become a go-to SDK for developers.

Are you a developer or application owner who wants to explore building a mobile app? Are you looking for a suitable framework that will accommodate your needs? Flutter is undoubtedly worth a try.

Let’s understand what Flutter is, its pros and cons, applications, and comparison with React Native for building mobile applications!

Flutter functions well & could be installed easily on different operating systems like Linux, Windows, Mac Os & Chrome OS. Flutter is a type of this tool, which is a free and open-source technology. Developed by Google, Flutter uses a single codebase, making the development process much easier and time-saving.

Flutter uses Dart, which is Google’s programming language, and React Programming Architecture that is developer-friendly. Flutter is compatible with Android Studio, inline videos, Firebase APIs, and ads by offering high-performance application development. Flutter has emerged as one of the most accessible software development kits for building mobile applications in Android and iOS.

Flutter is object-oriented, fast, and, most importantly, powerful when building high-performance applications. However, compared to other leading technologies like Xamarin and React Native, Flutter is still the new kid on the block in the software development industry.

Powerful widgets that are entirely customizable for beautiful UI elements, Flutter has everything to build your mobile app. By reducing the importance of coding, developers can quickly create an app that is appealing and functional.

Many people mistake Flutter for being a framework or a library. However, the truth is Flutter is a complete software development kit (SDK). Flutter has everything you need to start building cross-platform applications!

Considering how practical and easy Flutter is, many big companies have used it to design their applications — companies like Alibaba, Birch Finance, Hamilton Musical, Reflect, and The New York Times have developed their mobile applications on Flutter. 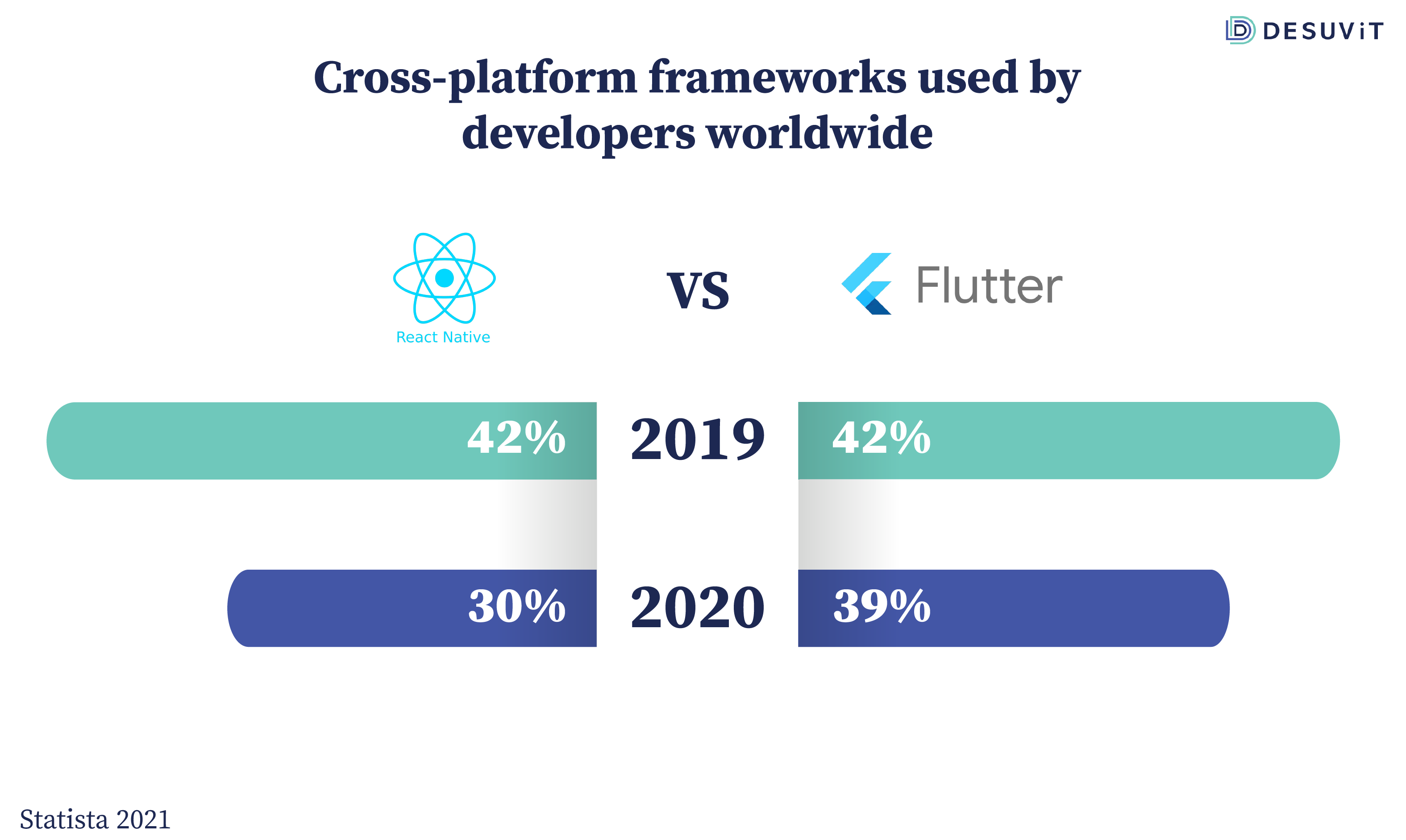 What We Like about Flutter? 7 Pros for Mobile App Development

Flutter is a new technology, but it is already taking on the software development industry with its impressive features. Here are some of the advantages of using Flutter for developing mobile apps.

Many app owners dread the thought of hiring different developers to design the same application for different platforms. An easy solution to this is by simply hiring a team of Flutter developers who will write one code for multiple platforms.

With a single codebase for different platforms, app owners and developers can save time and cost. Apart from the economic benefits, Flutter has a host of functions that will ensure that the app performs like a native application.

Considering that Google has developed Flutter, there is no shortage of documentation and resources for learning it. From practical exercises, video lessons, documents, and problems to solve, Google offers extensive content for exploring Flutter.

Google thoroughly researched the developer expertise level before launching Flutter. It is why most developers, even with little coding knowledge, find it effortless to code on Flutter. Additionally, Flutter is one of the top fifty active repositories on GitHub.

Flutter Architecture has three layers, and one of them is the Dart framework. In this framework, developers design widgets, animation, classes, gestures, and other features. Dart framework is considered to have the most crucial elements for building a mobile app.

Flutter offers a dynamic and fast-paced app development environment. Even with changes, other cross-platform technologies take a long time to build and show the differences. However, in Flutter with the unique “Hot Reload” feature, you fix bugs, make changes and experiment with the code faster.

The Hot Reload feature makes the Flutter SDK developer-friendly, making the testing process streamlined. With faster cod writing and Hot Reload, you can see the changes on the spot and immediately within milliseconds.

Quality is the success of any application. To achieve the highest possible quality testing is an important step in development. Flutter has very good support for the testing. It supports,

If you want your mobile application to provide a smooth user experience, then Flutter is where you have to develop it. With an emphasis on user-friendly design and features, you can design impressive user interfaces that your app users will appreciate.

The Flutter framework has huge libraries, API access, scrolling features, and many versatile components. These elements allow developers to design a natural user interface across Android and iOS platforms. When you develop on Flutter, the UI remains consistent for older software versions for iOS and Android.

Flutter is a cost-effective solution when you have a tight budget and a fast-approaching deadline. The flexible and easy-to-use UI, advanced app development processes, and single codebase make it easy to design an MVP fast.

Flutter is a great option to try out your idea before spending money on actually developing it entirely. There is no better economical place to design your MVP with highly reliable and vast community support from Google.

When you develop apps in Flutter, you use a single codebase for different platforms. It makes putting out updates also an easy process. With the option of sending updates to both Android and iOS simultaneously, mobile app owners can save extra money.

The version releases and updates are synchronized easily in the backend, so the developers don’t have to work on them separately. Bug fixes and other application maintenance are also easily managed by flutter developers.

What we Dislike about Flutter? 4 Cons for Mobile App Development

After seeing some attractive advantages of Flutter, you might wonder if this SDK is too good to be true. Here are some of the drawbacks of using Flutter for mobile app development.

1.    Doesn’t Have much Third-Party Libraries and Support

Having the support of third-party libraries is crucial when developing software. Considering Flutter is new in mobile app development, finding free libraries and packages is a little difficult for developers. It’s still relatively underdeveloped and is constantly improving to provide an ideal development environment.

Flutter is considered one of the top emerging technologies. But, this can be a disadvantage for seasoned developers who don’t know how to use it. Flutter is adding new features and constantly developing which means getting hang of this young technology is not so easy.

Although the apps developed in Flutter are beautiful, their file sizes are enormous. The file size of the app is a crucial factor for users who will be using it. Users prefer having applications with a small file size because almost every user struggles with storage space. The huge file size of an application takes a long time to download and update.

4.    Has no iOS-specific Features

Flutter fails to provide the same feeling that comes when developing native solutions. Flutter, developed by Google, doesn’t have many iOS-specific features. The Cupertino library replicates Android’s Material Design, but many elements like text fields and buttons vary in iOS and Android.

Flutter vs. React Native: Which is the best?

With the popularity of Flutter, it’s a never-ending debate for developers to choose between React Native and Flutter. React Native has been in the market for a longer time and has been a favorite of many developers. Additionally, it uses JavaScript, which is a famous programming language.

Considering that Flutter is an emerging technology, GitHub has more than 120k stars. Flutter saw a whopping 9% increase in use (from 30%) by software developers worldwide. However, 42% of cross-platform coders still prefer React Native.

Looking at the rate that Flutter is growing, Flutter will be overtaking React Native sooner or later. Flutter’s growth is massive owing to the easy coding and faster development time. It’s also overall quick in performance when compared to React Native apps.

Developing apps in React Native is a great choice when you need the support of libraries and extensive tutorials and are confident in JavaScript coding. Developed and released by Facebook in 2015, React Native has been the leading framework for designing mobile apps in JavaScript. Now developers are leaning on Flutter for its apparent benefits.

Are you wondering if Flutter is the proper software development framework for you? Want to know in which scenarios Flutter would be ideal for designing mobile apps? Read on to find some applications of Flutter.

When should you use Flutter?

Now that you’ve seen the pros and cons of Flutter, you must be confused about when to use it. Although the pros outweigh the cons, using Flutter is subjective to your project’s needs and objectives.

Here are some of the scenarios where using Flutter for developing apps will be ideal.

With the cross-platform software development kit of Flutter, you can develop apps quickly. The customizable UI widgets and builder tools make the developing process swift. Everything becomes streamlined and quick when you use Flutter, from writing the code to testing it and fixing issues.

When you are facing a strict deadline, Flutter offers the quickest way to get an MVP developed. The MVP designed by Flutter is excellent for pitching your idea, testing, and even releasing it for users.

To Design an Intricate User Interface

If you’re a detail-oriented person, you will appreciate the creative control that Flutter gives you. You can design everything down to the pixels and control how users will see it on screen. Whether you want a simple design or a complex UI, Flutter will not affect the mobile app’s performance.

In Flutter, you don’t need a JavaScript bridge which is mandatory when developing in React Native. It is the reason why Flutter apps work faster and smoother without any glitches or lags. In comparison, Flutter apps outperform other apps developed through Xamarin or React Native.

When you’re on a tight budget, using Flutter is a great option. You can successfully cut costs by developing one app that can run on multiple platforms. It will save you lots of money in the software development process and help you see if your idea is worth it.

Developing Time for Apps Is Short

With a single codebase, Flutter uses Google’s programming language, Dart. It speeds up the development process, and you can finish writing code fast. Designing apps with Flutter is fun, and developers can unleash their creativity quickly without wasting time.

The unique ‘Hot Reload’ feature in Flutter makes fixing bugs easy and less time-consuming. If you want speed in the software development process and the overall performance of the app, Flutter is a perfect choice.

Although new, Flutter has proven to be one of the fast-growing technologies in software development. Being free and open-source, it’s setting a whole new standard for developing apps efficiently and straightforwardly.

Considering industry-leading competitors like React Native and Xamarin, Flutter has made its mark in a short time. Understanding the pros and cons of Flutter will help make an informed choice when choosing SDK for your mobile app.

Are you looking for a software development company to develop your mobile app using Flutter? Look no further; Desuvit is here to assist you! With a talented team of developers, we can translate your idea into a mobile app in no time. Contact us to discuss the intricacies of the project. Let us help you grow your business.

7 Reasons Why You Should Consider Pair Programming